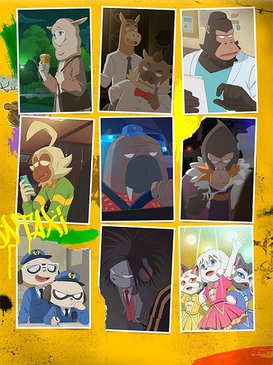 MyAnimeList describes the plot as follows,
“Eccentric and blunt, the walrus Hiroshi Odokawa lives a relatively normal life. He drives a taxi for a living, and there he meets several unique individuals: the jobless Taichi Kabasawa who is dead-set on going viral, the mysterious nurse Miho Shirakawa, the struggling comedic duo “Homo Sapiens,” and Dobu, a well-known delinquent.
But Odokawa’s simple way of life is about to be turned upside-down. The case of a missing girl the police have been tracking leads back to him, and now both the yakuza and a duo of corrupt cops are on his tail. Set in a strangely familiar city filled with unusual individuals, Odd Taxi is a bizarre story about a humble taxi driver and the mystery of a lost high schooler.”
‘Odd Taxi’ originally aired on TV Tokyo and AT-X in Japan. A movie adaption is in the works through OLM, P.I.C.S, and Asmik Ace.

Jacob Airey is a writer, nerd, YouTube host, movie reviewer, and pop culture critic. He started the website StudioJakeMedia.com in 2012 where he covers a vast variety of topics including film, TV, anime, music, and faith. He is also the author of The Seven Royals fantasy novel series.

The fantasy anime series from Studio ENJI ‘Management of a Novice Alchemist’ is set to premiere in Japan in October 2022. Based on the...

‘Smile of the Arsnotoria the Animation’ English Dub Cast Unveiled

‘Smile of the Arsnotoria’ is a mobile video game RPG developed by NextNinja and released by Good Smile Company. Liden Films produced an...

This week we attended an Emmy Q&A hosted by The Wrap. Producers for various shows competing for an Emmy were present, including James Gunn. The...

The ‘Leaked’ Batgirl Movie Trailer Looks Like Pure Cringe (Because It’s Supposed To.)

The Little Mermaid Backlash Leads to ‘Whitewashing’ Ariel with AI. Twitter is Furious.